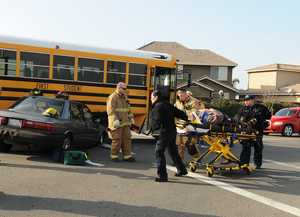 On January 18 a 64-year-old man was injured when his car was involved in an accident with a Merced County Office of Education school bus near Yosemite Avenue and El Redondo Drive. Reportedly the school bus was stopped in the eastbound lane of Yosemite Avenue preparing to make a left turn onto El Redondo Drive when the Camry was westbound on Yosemite. It is believed that the Camry ran a stop sign and ran into the side of the bus. The driver of the Camry was airlifted to the hospital. The three students and the driver on the bus were not injured. No further details are available at this time.