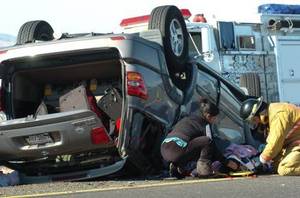 The accident that happened on November 29 on I-5 near Highway 152 that injured 5 people has received a more detailed report. According to the later report a Toyota Tacoma driven by Tony Gonsalves spun out in the fast lane and came to a stop facing south in the northbound lane on I-5 near Highway 152 and Los Banos. Then Roger Simmons swerved his Ford F-250 to the right in order to avoid hitting Gonsalves’s Tacoma. At the same time a Toyota Sequoia driven by Troy Allen Thompson which was following the F-250,  hit the Tacoma and the F-250 and overturned.  Thompson along with his passenger were air lifted to a local hospital with serious injuries. Two other passengers in the Sequoia had minor injuries. Gonsalves also suffered minor injuries.