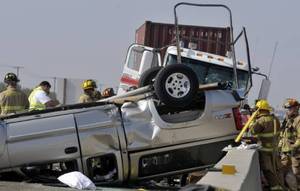 On October 20 there was an accident on Highway 99 in Modesto involving a big rig and 4 other vehicles that killed one person. Reportedly the big rig failed to stop for slowing traffic and then triggered a five-vehicle, chain-reaction accident. The driver of a Nissan Frontier was declared dead at the scene of the accident. A passenger in the Nissan is reported to have suffered major injuries. Four other people are reported to have suffered minor injuries. The five cars had slowed down near the Carpenter Road-Briggsmore Avenue overpass for an unknown reason when the big rig failed to stop in time hitting the Nissan and pushing it into the other vehicles.