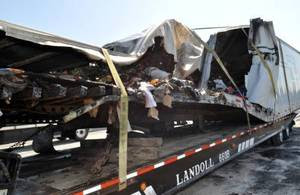 On July 6 a man was killed in and accident between three big rigs on  near Turlock on Highway 99 in Stanislaus County.  According to reports, the first big rig driver, Marcus Task, had stopped on the shoulder of the road. Task was attempting to reenter the roadway when the second big rig driver, Jaime Henriquez, saw Task’s truck and slowed to let him in. unfortunately, the third big rig driver did not see that Henriquez had slowed down. He then subsequently hit the back of Henriquez’s trailer. This caused the third cab to crush about 15 feet inward and erupt into flames. The flames then spread to the trailer of Henriquez’s truck. The third big rig driver was killed in the accident. His name has not been released until he can be identified via dental records. www.nelsonrozier.com