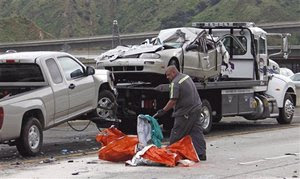 On April 11 five people, four of them children, were killed in a wrongful death accident on I-5. The accident occurred when a pickup spun out of control when the highway was slick due to rain. This caused a three-car pileup that killed five people and injured six others.  The pickup that initially spun out spun into the center divide and overturned. Then it was hit by a Nissan Altima  which was then hit by a Chevrolet Suburban. john Blackburn, the driver of the pickup, was killed in the accident. The driver of the Nissan, Francisco Enciso, and his passenger, Jessica Milan, were both seriously injured. The four children in the back seat of the Nissan, Xochitl Hernandez, Cynthia Hernandez, Edgar Hernandez, and Luis Villegas, were killed. The four people in the Suburban suffered minor injuries. Weather was definitely a contributing factor in this accident, but it most likely was not the only contributing factor. An investigation is being held to determine if unsafe speeds or mechanical failure could also be to blame. /