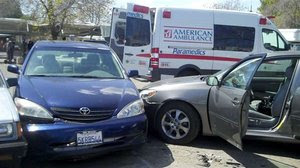 On April 1 a Toyota Camry was involved in a bizarre accident at San Joaquin and Fulton in Fresno. Reportedly Hasmig Megerdichian was trying to park his Camry in front of a farmer’s market when the car bounced over a curb, down an alley, over railroad ties back into the parking lot, before finally hitting a parked car which then hit another car. Megerdichian claims that she applied the brake but the car accelerated instead. A passenger in the Camry and a passenger in one of the cars that was hit complained of pain and were taken to a local hospital to be checked out. Due to recent recalls, any accident involving a Toyota warrants further investigation. Please contact us at / or call attorney John Rozier at 559-713-0159.