On March 11 Fresno police officer Mike Roberts was injured in an accident that occurred between his motorcycle and another vehicle on Bullard Avenue. Reportedly Roberts was traveling westbound on Bullard when an eastbound vehicle turned left in front of him onto Fruit Avenue. Roberts’s motorcycle slammed into the car and Roberts was flown over the car. The motorcycle reportedly burst into flames upon impact. Roberts suffered third-degree burns, a gash in the leg, a fractured elbow, a concussion, and several broken ribs. He underwest surgery to his elbow and will be hospitalized in the burn unit for a prolonged period of time. / 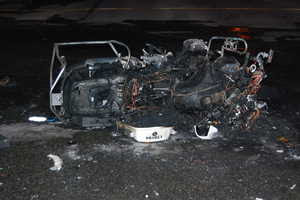