May 28, 2014- Three people were hurt in a vehicle accident that involved multiple cars, on Wednesday.  The collision happened in Modesto, at about 1:15 PM.

A woman was driving a Kia minivan southbound on Olive Street, when she went unconscious and ran a stop sign at the intersection of Needham Street and Olive.  The Kia drove into the path of a motorcycle being driven by a man, and his female passenger.  The motorcyclist attempted to avoid the van, but ran into the read left side. 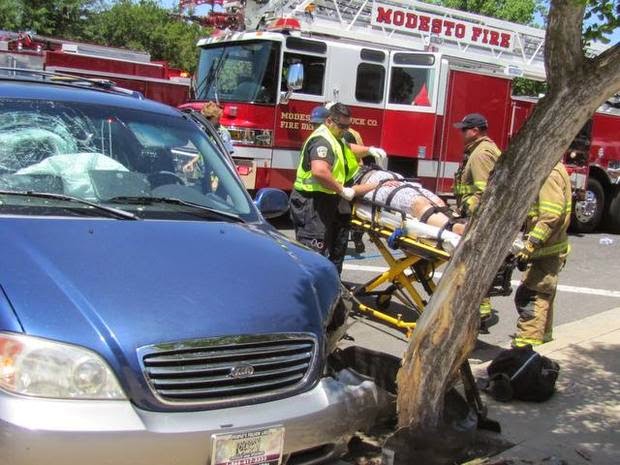 The bike fell and skidded into the next lane, where it and the two bikers were struck by a Ford sedan.  The minivan continued across the roadway until it smashed into a tree.
Emergency personnel reported that the woman appeared to have suffered a seizure, which caused her unconsciousness.
The minivan’s driver and the two motorcyclists all sustained injuries, and were taken to the hospital.  The man driving the Ford vehicle, was not hurt in the collision.
Fresno-Visalia-Bakersfield accident attorney, John Rozier.  Your lawyer for car crashes, wrongful deaths and personal injuries.  Big rig collisions, tankers, semitrucks.  Fog, dust storms, downed or blocked stop signs.  www.nelsonrozier.com or call me at 559-713-0159.