February 26, 2014- A car crash happened in southwest Bakersfield, after a driver tried to run from the police, on Wednesday.

The Police Department tried to pull over a man at the intersection of White Lane and Gosford Road.  The driver refused to stop and lead the cops on a 100 mile per hour chase.  The officers called off the chase, before any innocent bystanders were hurt. 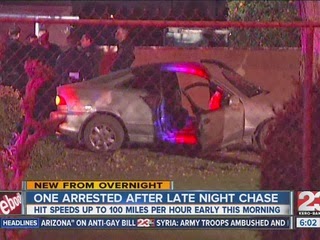 Shortly thereafter, the driver collided into a fence near South Union Avenue and Taft Highway.  The man got out of his vehicle after the accident and ran away on foot.

Police caught and arrested the driver, and he was taken to the hospital for treatment.

No further information is known at this time.

Please give me a call if you need legal representation or a consultation. Attorney John Rozier www.nelsonrozier.com or call us at 559-713-0159.My firm is located in Visalia, California on Caldwell Ave, just north of Bakersfield.