December 7, 2011- Two women were hurt after they were pinned under a run away truck, in southeast Fresno, on Wednesday night.

The two women were passengers in a Toyota Tundra pickup truck. The truck entered a driveway near Minnewawa Avenue and Belmont Avenue. The driver of the Toyota got out of the truck, but left the vehicle in drive with the two women inside.

The truck started to roll as the two passengers tried to get out. Both women were dragged until both front right and left tires pinned them to the ground. 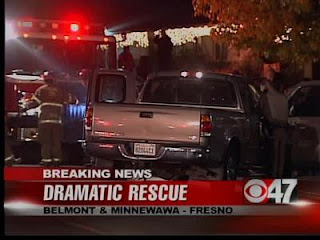 A Good Samaritan witnessed the accident and rescued the women by using his tire jack to raise the truck and pull the women free.

Both passengers suffered moderate to major injuries and were taken to Community Regional Medical Center.

If you need legal counseling or representation for this accident, please give me a call. Attorney John Rozier, of Visalia, just miles from Fresno, 559-713-0159.