Car Crashes into House in Fresno

November 30, 2011- A man driving in southwest Fresno crashed his car into a home, Wednesday morning, at about 11 AM.

The accident happened at Clara Avenue and Drummond Avenue.

The man was spinning the tires on his car in the middle of the street, when he lost control of the vehicle. The car plowed through the fence and into the house. 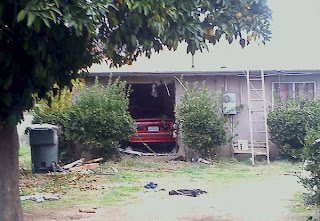 The resident of the house said he woke up to find the car in the next room.  The car hit a female dog, and one of her puppies. Both animals died in the crash.

The driver and another occupant in the vehicle ran away from the scene of the collision. No word on whether they were caught.