November 21, 2011- A train and a dump truck crashed at an unprotected railroad crossing, near Goshen, 10 minutes from Visalia. The accident happened at about 2:10 PM.

The truck, which was carrying a Bobcat tractor on a trailer, was southbound on Road 60, when it collided with the San Joaquin Railroad freight train that was traveling east on a track paralleling Avenue 308, west of Highway 99.

The CHP have reported that the truck’s driver failed to make a complete stop before crossing the tracks. The train stuck him at the rear of the truck and pushed the MD Concrete Cutting dump truck 100 feet before it was able to stop.

Three or four cars and the engine came off the tracks, but did not topple over. And about 2,000 gallons of diesel fuel leaked from the train. 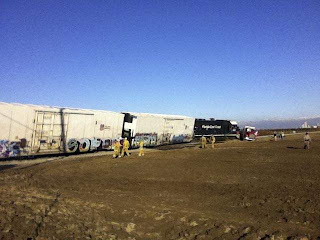 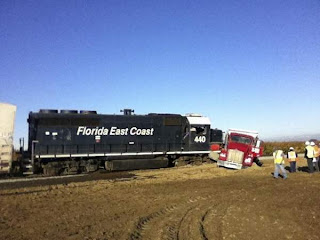 A hazmat team was called in to get rid of the fuel. And a crane was used to remove the truck from the train tracks.

The 25 year old driver of the truck suffered moderate to major injuries in the crash. He was taken to Kaweah Delta Medical Center.

It is reported that this is second accident to have happened at the same crossing in the past few months. A 31 year old woman, Debbie Felix, died in June, when her car was hit by a train.

Our expert engineers stand ready to continue their investigation of this unsafe area. Please give us a call. We are located in Visalia which is just minutes from the scene of this accident. Attorney John Rozier 559-713-0159