The accident happened at approximately 4:20 PM, between a Honda Civic, an Acura Integra, and another vehicle, near the intersection of Maze Boulevard and Stone Avenue. 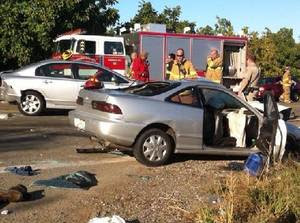 One man was pinned in the Integra, and had to be rescued from the vehicle by emergency crews.

It is reported that one of the heavily damaged cars burst into flames, after the collision. But personnel were able to extinguish the fire before it engulfed the whole vehicle.

The man that was pinned and one other person were injured and taken to a Modesto hospital. Their conditions are unknown at this time. 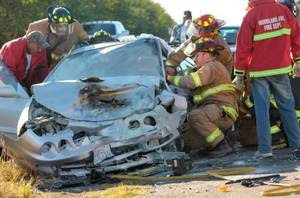 The crash closed Highway 132 in both directions for about an hour. It was opened to traffic at about 5:30 PM.

The collision remains under investigation. No other details about how the accident occurred are reported at this time.

This accident requires much more investigation. Please let me help. I am a personal injury lawyer that specializes in these accidents. Attorney John Rozier in Visalia, south of Modesto 559-713-0159.