September 1, 2011- A crash involving three cars, in Visalia, send two people to the hospital, on Thursday. The accident happened on Noble Avenue at Church Street.

The collision occurred when one vehicle slowed in the right lane on Noble Ave. Causing the two cars behind to rear-end the first car, and each other. Police are investigating whether the second car hit the first initially, or if it was pushed into the first by the impact of the third vehicle. 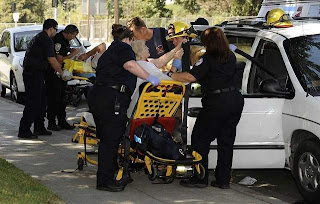 Two people were sent to Kaweah Delta Medical Center with injuries. The drivers in the other two cars refused medical treatment.

If you’d like legal advice or representation, please give me a call. Attorney John Rozier. I am located on Caldwell Avenue. 559-713-0159