September 2, 2011- a crash Friday night left two teenagers from Hanford dead, and four others with serious injuries. The accident occurred at about 9 PM.

The crash happened along Highway 46, east of Cholame in San Luis Obispo County, southwest of Visalia. A 1998 Toyota Camry carrying six teens, was traveling eastbound on Highway 46. The driver, April Canseco of Stratford, lost control of the Camry when it blew a rear tire and hit the center divider, just west of Kecks Road. The blown tire caused the car to roll several times. 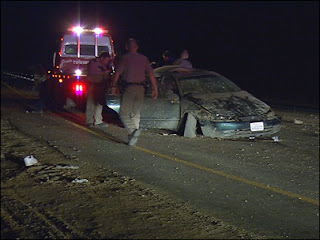 Two of the passengers, Itzyana Chaidez and Richard Hernandez, were thrown from the car during the crash and were pronounced dead at the scene. The other teens; Canseco, Raul Rodriguez of Corcoran, Gilbert Navarro of Corcoran, and a 17 year old girl, were taken to Kern Medical Center with serious injuries.

CHP reported that there were not enough seat belts in the Toyota for all the occupants. Alcohol was not a factor in the crash.