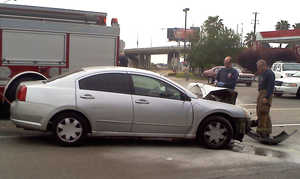 On April 20 a driver was arrested for driving under the influence after causing a three-vehicle accident. Reportedly the accident happened at the intersection of Ashlan Avenue and Golden State Boulevard and involved three vehicles. The driver who caused the accident complained of chest pain caused by a deployed air bag. That was the only reported injury. No further details are available at this time.