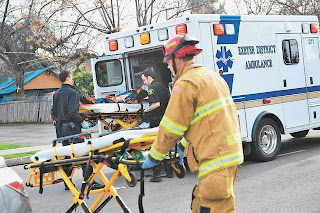 On March 1 Alice Davison was put in critical condition and two other people were injured in a three-vehicle collision at Pearl Street and N.W. Second Avenue on the Oval in Visalia. Reportedly Davison was eastbound on Pearl Street when she possibly failed to stop completely at the stop sign at Pearl and N.W. Second Avenue. She was then hit by two vehicles which were southbound on N.W. Second Avenue, a Dodge Durango and a Nissan Altima.  Davison suffered a shattered pelvis and was transferred from Kaweah Delta Medical Center to Community Regional Medical Center in Fresno. Jason Medina was the driver of the Durango. His young daughter in the vehicle was not injured, but he was taken to Kaweah Delta Medical Center to be treated for minor injuries. The driver of the Altima was taken to Kaweah Delta Medical Center as a precaution. Witnesses to the accident said the intersection is dangerous and needs to be fixed.