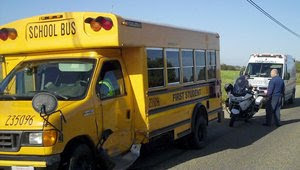 On April 6 there was an accident between a school bus and a car on Shields Avenue in Fresno. Reportedly the accident happened at the intersection of Shields and Hayes Avenue. Several students were in the bus but none reported injuries. The bus was damaged on the panel on the side and the sedan that hit it had major front-end damage. /